At the World Heart Beat Music Academy we create unusual and innovative ways to teach music. We acknowledge a multitude of musical disciplines in a policy that encourages an appreciation for greatness in culture. One of our musical schemes is to connect to youngsters wishing to develop their talents through the power and groove of reggae music.

We are fortunate to have backing and support for this project from Mad Professor and the Ariwa Studios.

Ariwa has contributed massively to shaping British reggae music over the last 30 years and the Ariwa sound has taken British reggae towards all kinds of areas it might otherwise have never ventured into.

Founder of The Ariwa record label, Producer of the Ariwa Sound

“First you have to back from where we come from, spiritually, mentally and then physically because a lot of people are lost and they don’t know where they are going and for the youngsters to get direction they have got to reach back to that source, they must go back to that source so I urge each and every one of you to get back into playing musical instruments and to tune in to and get down to the World Heart Beat Music Academy. This is the place.”

“The World Heart Beat Music Academy is very important. Kids can swing either way but if you have an option like this to come and learn in a place like this. You are saving a lot of kids from jail and criminal records. Believe me what you are doing is helping others.”

“I feel that it is important to give back to the world. The World Heart Beat Music Academy is so good that Ariwa has has got to back you. We have to back you.”
– Mad Professor Mad Professor was born Neal Fraser in Guyana, a small country in the northern part of South America. He earned his nickname as a preteen, thanks to his intense interest in electronics; he even built his own radio. At age 13, his family moved to London, and around age 20, he started collecting recording equipment: reel-to-reel tape decks, echo and reverb effects, and the like. In 1979, he built his own mixing board and opened a four-track studio in his living room in the south London. Calling it Ariwa, after a Nigerian word for sound or communication, he began recording bands and vocalists for his own label of the same name, During the 80’s The Ariwa studio grew into the largest black-owned studio in the U.K. From there, Mad Professor really started to make an impact on the British reggae scene. He produced major hit singles for Ariwa mainstay Pato Banton and Sandra Cross, and also helmed the breakthrough album for conscious reggae toaster Macka B, 1986?s Sign of the Times. At the same time, the ragga era was dawning, and all-digital productions began to take over reggae. As the ragga sound grew more and more dominant, Mad Professor’s brand of dub was praised for his inventive arrangements. The Dub Me Crazy albums reached the height of their experimentalism during the latter part of the ’80s. Right: The Mad Professor with John McLean, another big star in the the Reggae UK scene at the legendary Ariwa Studios.
Ariwa continued to prosper as a label, with further hits by the likes of Macka B, Pato Banton, Sandra Cross, female singer Kofi, Intense, Jah Shaka, John McLean, the Robotics, Sister Audrey, Peter Culture, Johnny Clark, and others. Additionally, he began to collaborate with some of reggae’s better-known figures; most crucially, he teamed up with main influence Lee “Scratch” Perry for the first time on the 1989 set Mystic Warrior. In 1991, he produced the first of several albums for the groundbreaking veteran DJ U-Roy, the acclaimed True Born African; he also went on to work with the likes of Yabby You and Bob Andy. He switched his focus to touring in 1992 and released the 100th album on Ariwa not long after.

With his high-profile collaborators, Mad Professor has made a name for himself outside of the reggae community, and is in demand as a remixer for rock, R&B, and electronica acts. He has remixed tracks by Sade, the Orb, the KLF, the Beastie Boys, Jamiroquai, Rancid, Depeche Mode, and Perry Farrell, among others. 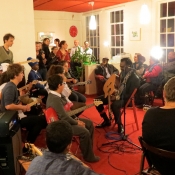 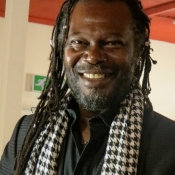 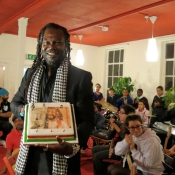 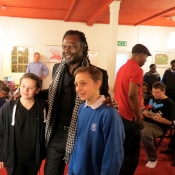 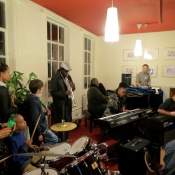 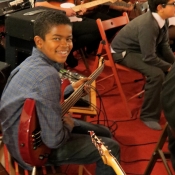